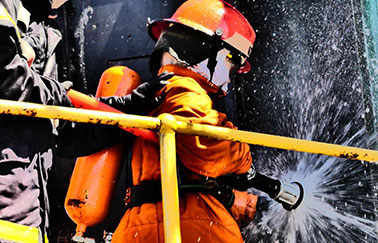 The course is a structured mixture of theory and practical application and covers these main areas:

It covers fire fighting procedures at sea and in port with particular emphasis on organisation, tactics and effective command including liaison with shore-based firefighters. It also covers topics such as ventilation control, hazards involving dangerous goods and the effects of fire fighting water on ship stability.

A variety of practical exercises involving fighting fires of different types and intensity are included.

Students are assessed on their ability to successfully control fire fighting operations.

All personnel employed onboard vessels who are involved with the emergency response teams command and control.

A Project Maritime Training STCW 2010 Manilla Compliant Certificate will be issued on delegate been found competent.

All delegates will be asked to complete a medical questionnaire prior to course commencement.

Courses as per training schedule or on request